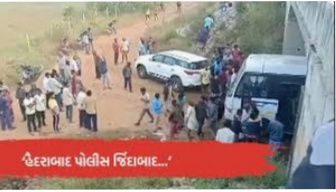 Hyderabad: Police have shot dead all four accused in Hyderabad encounter case. The encounter was reported late Thursday night on National Highway 44. The police further said that the accused had tried to escape from the police encounter so that they were shot.

All four were taken to the crime scene late on Thursday night near Gatraj National Highway-44. The cops were trying to escape from the encounter so the accused was confronted.


A large number of people staged outside the police station on Saturday in Hyderabad, Telangana's capital, where accused of raping and killing a female veterinarian have been closed. The protesters demanded stern punishment for the accused so that the woman doctor has been brought to justice.

Let us tell you that on the night of November 27-28, all four accused crossed the border with a woman doctor in Hyderabad and then brutally murdered her. In this connection, there was intense police protest across the country.