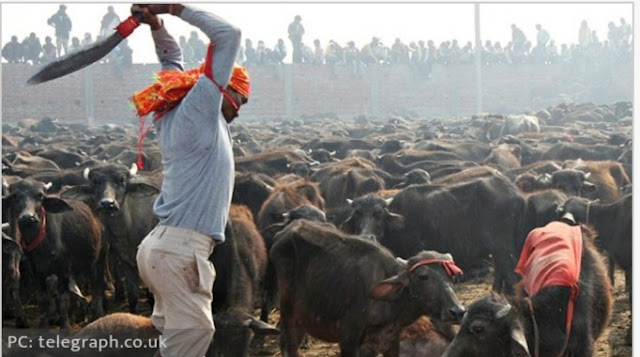 There are still many temples where sacrificial animals are sacrificed in the name of religion, today it is to speak of a temple where once in five years a festival is organized to worship Mataji, which is attended by thousands of human beings. Abol beasts are slaughtered and in two days the temple becomes the largest slaughter house in the world. The name of this temple is Gadhimai Temple and the tradition of sacrificing animals at the fair of this temple has been going on for years.

According to a report, the temple is located 100 km from Kathmandu in southern Nepal in Bariapur. Which is popular in the world from Gadhimai Temple. A festival is held in Gadhimai temple every five years in honor of Goddess Gadhimai. A large number of people from not only Nepal but India are also participating in the festival. Thousands of animals are sacrificed in two days in a crowded festival of millions of people. Animals are found all around the temple where the festival is completed. A festival was held in the temple on December 3 and 4 this year and 30,000 animals were sacrificed in two days.

Animal rights activists are protesting the killing of such a large number of cattle, and the Supreme Court has also given orders to the festival committee. Since 2009, the temple has been forced to stop animal sacrifices but thousands of animals are offered every five years. The only such festival is held in the world where such a large number of animals are slaughtered in just two days.