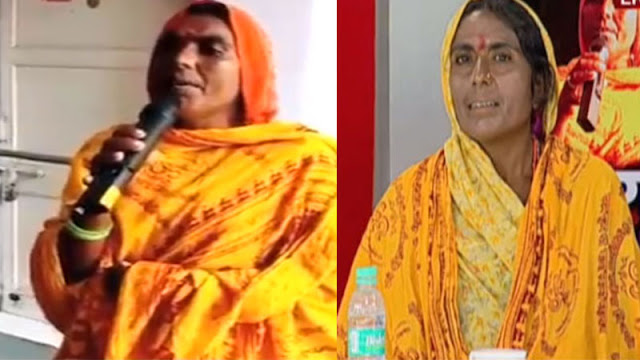 Even on a normal person, nature is kind and the art can be accepted and the rest of the art is innate.

Chandrabane Parmar, a plaintiff who has given a sweet throat to a woman of the caste, runs his way by begging. The tone of his hymn is so melodious that people stand for two hours to hear it.

Chandrabane lives in a hut Manavadar of Junagadh reached the Bhavnagar, singing Chandraban in Katakpara village of Taluka. Kokil Kandhi Chandra lives in a jarpanjar hut but he sings Bhalabhala in the color of Gujarati music by singing folk songs and hymns like Bhuli Bisari Yaday. How come against Coke?

A policeman named Bhavnagar Dineshbhai Boricha heard a moonlight and made a video of it. And just after the magic of the moon's sound, the video went viral while watching. Dineshbhai says I was informed by my friend Shivraj Singh Jhala and we were committed to deliver them to the people.
The folk studio reached Chandraben Chandraben's music was honored by folk studios in this regard. Some people were also obliged to train folk songs for the sake of their soaring voice. At present Chandra Parmar has become known in every house.